I’m posting this today to share some exciting news.  RESULTS International (Australia), an organisation with whom I’ve had a long affiliation, are hoping to establish a RESULTS Canberra group in 2015!

RESULTS group members meet each month to learn about an issue of poverty, become articulate in speaking about the issue, and take action to build the political will to solve it. This usually means writing to or meeting with a parliamentarian, or writing to a newspaper about the issue. 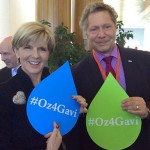 Since 1 July 2014, our grassroots advocates around the country have organised 14 meetings with MPs, had 25 letters to the editor published in newspapers, generated 11 media items, raised $16,000 and written letters to their MPs.  Our advocates recently played a role in securing an additional $50 million for GAVI, the Global Vaccine Alliance – an organisation that works to make vaccines affordable and available for the world’s lowest income countries.

Contact me if you are interested in learning more and being involved in the group – whether helping to start it, inviting others, or being in the group yourself.