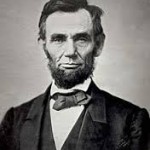 Great advice from one of the greatest of the US presidents – “Don’t believe everything you read on the Internet”.   Abraham Lincoln was the 16th president of the United States, serving from March 1861 until his assassination in April 1865 by John Wilkes Booth.  Apparently, according to Seth Grahame-Smith, he was also a renouned vampire hunter.