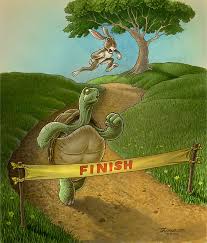 Once upon a time, there was a Hare who ridiculed a slow-moving Tortoise.  Tired of the Hare’s boastful behaviour, the Tortoise challenged the Hare to a race.  The Hare soon leaves the tortoise behind and, confident of winning, takes a nap midway through the race.  When he awakes, the Hare finds that his competitor, crawling slowly but steadily, has arrived before him.

As in several other fables by Aesop, there is moral ambiguity about the lesson it is teaching.  Here are some of the lessons:

According to Lord Dunsany, the reason that the last lesson is not widely taught is that very few of those that witnessed the race survived the great forest-fire that happened shortly after.  Some time after the race, the Hare, the Tortoise and few other forest creatures saw the fire from a long way off from the top of a hill at the edge of the forest, and they hurriedly called a meeting to decide which messenger they should send to warn the other forest creatures. They sent the Tortoise!

The first version of this story came out in Aesop’s Fables.  A later version of the story in La Fontaine’s Fables, while more long-winded, differs hardly at all from that of Aesop.  The data has largely come from wikipedia.